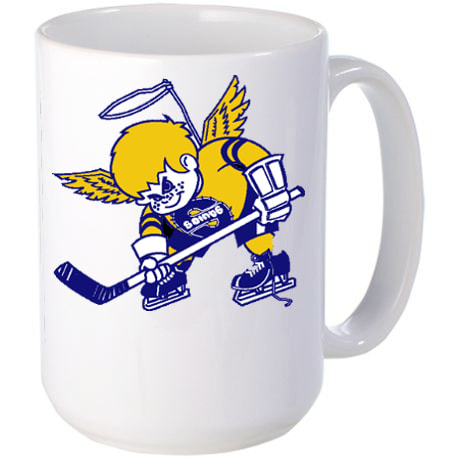 SKU:
Add to Cart
The Minnesota Fighting Saints was the name of two professional ice hockey teams based in Saint Paul, Minnesota that played in the World Hockey Association. The first team was one of the WHA's original twelve franchises, playing from 1972–76. The second team was relocated from Cleveland, Ohio, and played for part of the 1976–77 season. Neither edition of the franchise completed its final season of play.
About Our Mugs
15 oz. Brilliant White Ceramic Mug * 4.5” High x 3.4” Diameter * White High Gloss Exterior Finish *
Comfortable “C” Curved Handle * Printed with Superior Sublimation Ink * Dishwasher and Microwave Safe

We Want You Happy
We want you to love your 3313 Gallery product. If you are not satisfied for any reason with the final product, you may return your purchase for a replacement or refund within 30 days of receipt. In case of breakage or other problems, contact us at 651-233-3313 or e mail us at 3313@3313gallery.com  for a prompt resolution.
​
Delivery Charge: $8.50 for the first mug and $.50 for each additional mug in the same order. Delivery charge will be computed at check out.